Tool- Schism (Cover by Godzilla In The Kitchen)

EN
Bon soir Gozillas and Godesszillas!
Still not silent! We have received yet another great album review from our friends of Koid’9 magazine rock & progressif in france (Visit)!
You can find it in the 100. issue of their magazine or Article Special thanks to Renaud Oualid.

Godzilla In The Kitchen is an instrumental progressive rock formation from Germany, more precisely from Jena. The band members are influenced by Progressive Rock or Alternative Bands like Pink Floys, Marillion, Tool, Faith No More and Helmet. In 2011 they started their practice and tied together their different musical styles and aspects to create a unique mix of melodies and rythmic complexity.
After three years of stage performance and practice the decided to produce their first CD and started recording in April of 2014, finishing it after one year of taping, mixing and mastering.
So here is their first baby, filled with 10 pieces and a playtime of around 60 minutes, released first in May of 2015 (we have just now heard of it!) The Band ist made up by guitarist Eric Patzschke, bassist Simon Ulm and the drummer Felix Rammbach. The purely instrumental music is not easy to acces for everyone, still the melody brings it closer to the receiver or listener. The music is very complex, with absolutely crazy rythms (suitable for every one who wants to get into complex, uneven rythms), shocking and shredding guitar riffs, as well as a groovy bass, which is very present in the mix. It is music that does not give you a headache or is tiering, since the musicians were able to put in some relaxed breaks in the otherwise fast and driving songs. Generally this kind of music seems to lack a bit of variation in my opinion, since the songs are all in a way alike.
This album will appeal to all who want to get a little more into harder rock and who do not have a problem with purely instrumental music. Also the Cover is a very nicely drawn piece of art by Mario Thieme.

This album will appeal to all who want to get a little more into harder rock and who do not have a problem with purely instrumental music. Also the Cover is a very nicely drawn piece of art by Mario Thieme.

Thank you for the translation from french Nicole Philippczyck!!
END_OF_DOCUMENT_TOKEN_TO_BE_REPLACED

EN
With shaking knees and trembling lips we read through a new full album review that arrived in our kitchen from the known to be very critical – quiet apart from the extend of the reviewed band’s fame – and prestigious website Musikreviews.de. Though we haven’t the highest rating possible, remember – it’s the inner values that matter the most! We are delighted. If you also want to be delighted just click the link below.
STAY TUNED!
END_OF_DOCUMENT_TOKEN_TO_BE_REPLACED

We are very proud to share our first review from italy with you. Metaleyes magazine reviewed our album. The original text can be found here: Review Metaleyes Italia

We translated it for you:

Godzilla in the kitchen, a trio from the former DDR (Jena), provides some interesting instrumental-progressive-rock. They employ characteristic turns and play by the rules, still the do not evade some smaller tumbling blocks.

Inspired by bands like Tool (and thereby bands like king crimson) the three youngsters from Germany plunge head-first into an adventure with unknown ending. They manage it well, but not without minor flaws. END_OF_DOCUMENT_TOKEN_TO_BE_REPLACED

EN
Album production is going further and we are making big steps with our songwriting. Come and see for yourself.
Some rehearsal of our new song: „Crawl Across“ is now avaiable on YouTube. 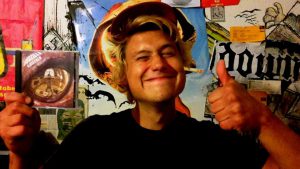